Two LCPS schools have been recognized as among the best in the state for their work with students with disabilities, based on those students’ academic progress during the last school year.

EB Frink Middle School and Pink Hill Elementary School were named a Top 10 School for North Carolina in the National ESEA Distinguished School Program. Both schools were honored for “excellence in servicing special populations of students,” specifically students with disabilities.

Only Lenoir County Public Schools had two schools on the Top 10 list.

Scored on results of state standardized tests administered last spring, Frink and Pink Hill exceeded state standards for academic growth across their entire student populations, but each posted chart-topping growth numbers for students with disabilities, one of several subgroups identified in test results.

The secret to that success, according to educators at the two schools, lies largely in giving these students the confidence they need to succeed.

“These students have been told they can’t for so long that sometimes they internalize that feeling. We want to flip that paradigm so that they say, I can,” Frink principal Michael Moon said.

That playbook contains multiple chapters – making students partners in their progress by charting their growth and keeping them informed, creating a safe space for them to work through learning issues, raising their expectations and building relationships not only with the students but with their parents or caretakers as well.

“We have great parent support and a very open line of communication with parents,” Amy Taylor, a veteran Exceptional Children’s teacher at Pink Hill, said. “I don’t know of any parent who doesn’t have my cell phone number.” 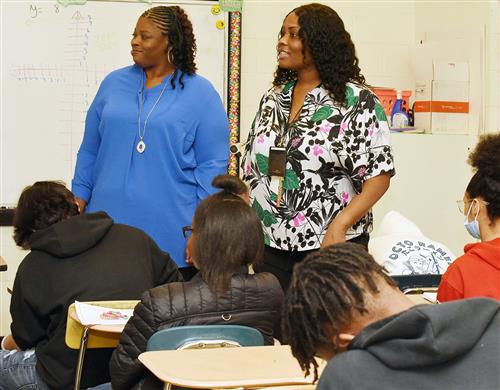 The seventh- and eighth-grade students that Melanie Bowden and LaKeesha Faircloth teach at EB Frink face high-stakes tests in math and reading and, for eighth graders, science. Their test scores yield year-end data on academic proficiency and growth; while their students with disabilities subgroup posted big gains in both categories, it is the growth number on which the teachers hang their hat.

“Success doesn’t always look like an ‘A.’ It looks like doing better than last time,” Bowden said. “We keep moving that bar higher. Small changes are still good changes.”

Their students know how they’re doing because – as with all students at Frink and, indeed, with all students in the school district – teachers meticulously track and record student performance on assessments and keep each student updated on his or her individual data.

“We pull reports and conference with students to let them know where they’re going,” Taylor said. “There are data points. That way they can chart where they are and what they’re doing. I do feel like it’s good for them to see where they’re going, to try to encourage them. They need to see that growth.”

The students with disabilities subgroup at Pink Hill Elementary posted a 40 percent proficiency score, more than double the results from 2020-2021 and slightly better than pre-pandemic results; however, it was the school’s growth rate – 86.8 percent of these students met or exceeded standards – that cemented Pink Hill’s place as a Top 10 school.

The story is similar at EB Frink, which posted an overall growth rate of 89.3 percent, among the highest in the state, and met or exceeded growth standards in all seven of the school’s subgroups. The growth percentage of the students with disabilities subgroup was 85.6 percent and those students posted an overall proficiency score 10.2 points higher than the previous year.

Students with disabilities comprise about 15 percent of the total student population at both schools, with the great majority of those students in tested grades.

Students who score a 3 or better on state-mandated standardized tests are deemed proficient in that tested area. The growth calculation considers each student’s testing history compared to the performance of similar students over time; it yields a standard that, when individual student results are aggregated, schools can exceed, meet or not meet. In testing for the 2021-2022 school year, 14 of the district’s 17 schools either met or exceeded growth standards.

As impersonal as standardized tests can seem, preparing students for them – to accurately show what they know – can be intensely personal, particularly for students with disabilities.

And more nurturing, Faircloth added. “We make the kids feel comfortable,” she said. “A lot of them are struggling readers and are afraid to read in a large group; but when they come in our classrooms, they are comfortable reading. Even if they mess up, they know this is their safe space.”

Of course, LCPS and its schools have programs designed to spur student achievement. Taylor credits the large-scale summer learning camps the district has offered the past two years with “helping students not lag.” An intervention program in its second year brings in-school tutoring to students in all schools on a regular schedule. Then there’s always the pizza party to celebrate a good class result or a reward coupon that students can redeem at the school store.

“The incentives and motivators, they’re great. The students respond well to that,” Frink principal Moon said. “But I feel like we’re starting to see some of that intrinsic reward as well, where they can see this is possible, that they can do this. They’re motivated by that, and I think you can’t overstate how important that is.”

Amy Taylor works with a student at Pink Hill Elementary, a school singled out as one of the best in the state for helping students with disabilities progress academically.