The annual program – co-sponsored this year by Guy Roofing – recognizes outstanding high school student-athletes in the Carolinas who excel in their sport, in the classroom and in their community. 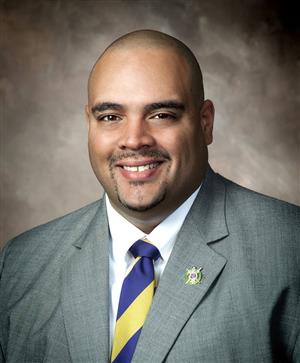 “I’m very thankful to receive that award,” Nicholas said. “I believe it portrays that I’m not only a leader on the football field but a leader in my community as well.”

With the award comes a $500 donation to Kinston High’s athletic department. Nicholas will be recognized as a Carolina Panthers Community Captain at the Panthers’ Nov. 7 game against the New England Patriots.

Winners – five males and five females – are culled from nominations made by members of the media. Nicholas was nominated by Bryan Hanks, who hosts a weekday radio program and broadcasts high school football games. As part of the application process, Nicholas wrote an essay on what being a community captain means and how he fills that bill.

Nicholas plays offensive and defensive tackle for the Kinston High Vikings and was named to the 2A All-State team as a junior. Academically, he is the top student in his class, a full diploma candidate in the International Baccalaureate program whose course load includes college-level and AP classes.

“Nicholas participates in the most challenging coursework offered to high school students,” Kinston High principal Kellan Bryant. “As an honors student, he continues to develop his skill set to inquire, to evaluate, to produce and to persevere. He exhibits a natural ability to approach challenging academia with an ‘I can and I will’ mindset.”

He is a member of the school’s chapter of Fellowship of Christian Athletes and a peer mentor with its underclassman support program. He is vice-president of the school’s National Honor Society chapter.

In addition to the Carolina Panthers Community Captain Award, he was selected for the 2021 class of North Carolina Governor’s School and is one of 30 students in the county enrolled in the 2021 Chick-fil-A Leader Academy.

He has previously been selected for the Disney Dreamers Academy, the NASA Summer Aeronautics Program at Elizabeth City State University and the East Carolina School of Business Summer Innovation Academy.

He is Kinston High’s nominee for the Morehead-Cain Scholarship to the University of North Carolina.

Nicholas is the son of Erin and Nicholas Harvey II of Kinston. His mother is high school programs liaison for Pitt Community College. His father is assistant superintendent of Lenoir County Public Schools.