Over the public address system. 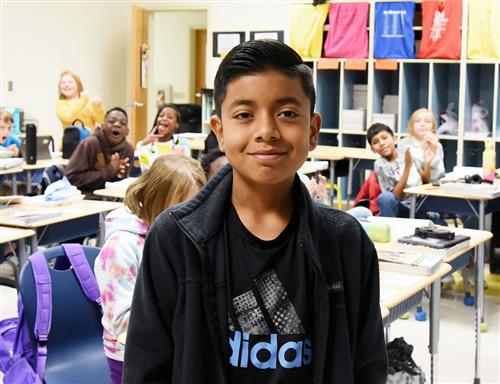 The 10-year-old swallowed his nerves and read with confidence, relaying information about celebrations and festivals like Fiesta Quinceanera, the special celebration of a girl’s 15th birthday, or Cinco de Mayo, which Anthony pointed out to his listeners is not Mexico’s Independence Day but the commemoration of a Mexican battle victory in May 1862.

His facts, as instructive as they were, really amounted to an exercise in appreciation, one of the dozens of ways schools, teachers and students across LCPS have recognized the cultures and contributions of Hispanics and Latino Americans during Hispanic Heritage Month, which ends Saturday.

In the pre-kindergarten classroom of Beatrice Irizarry-Marquez at Southeast Elementary School, a team from the Community Council for the Arts helped the district’s youngest students paint maracas and acquainted them with the flags of Latin American countries and famous artists with Spanish roots on Wednesday.

The children had already made pinatas and taste-tested tamales as Hispanic Heritage Month activities, but a class led by a teacher who describes herself as “a proud Hispanic” is never far away from the realization that 15 percent of the district’s students identify as Hispanic.

“Everything we do in English we try to do in Spanish, too, for the benefit of the Hispanic children and the other children,” Irizarry-Marquez said.

A sampling of other Hispanic Heritage Month activities from around the district include: 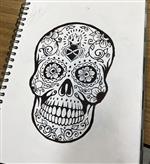 -- Also at Frink, eighth-grade English Language Arts teacher Ruth Anderson taught her students how to weave Ojo de Dios, or God’s Eye, a ritual object made by the Huichol indigenous people of Mexico, providing instructions first in Spanish and then in English and working in a history lesson.

"I want to be very inclusive this year to all heritages, traditions, and cultures to make all students aware of the diversity element of people in our community," Anderson said. "I picked Ojo De Dios because it has a story and legend attached to it that was fun to learn about. I also wanted to have students learn about a tribe that is still alive and celebrate this Ojo de Dios in a big way. The students were really interested in the tribe that lives in Mexico and they had to learn to weave the Ojo de Dios which for some was quite the challenge. The students told me they really loved learning about the tribe, the traditions, the legend, and the story behind the tradition of Ojo de Dios." 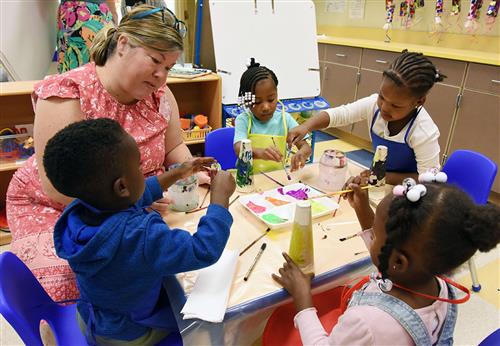 -- For its Fiesta Day on Wednesday, Contentnea-Savannah K-8 School treated its teachers to a Mexican lunch.

Spotlighting different cultures is part of the instructional program at Banks, where principal Jan Tucker and a committee of teachers develop activities.

“As a committee, we started talking about that last year, how every month we were going to highlight a different culture and we knew this was Hispanic Heritage Month and that we would do that in October,” Tucker said.

Speaking of spotlights, as he returned to class from the principal’s office, Anthony Aguilar collected several high-fives from teachers in the hallway and, once back in Karyl Willis’ room, his classmates met him with rousing applause.

He’d done well as a teacher, but probably better as a student of Hispanic Heritage Month.

“We’re basically appreciating a culture,” he said in summing up this time of special emphasis for LCPS. “Not just passing over it, like, oh, it’s just another country.”

After delivering his lesson for Hispanic Heritage Month at Banks Elementary, fifth-grader Anthony Aguilar accepts the applause of his classmates.

Beatrice Irizarry-Marquez helps her pre-kindergarten students at Southeast Elementary School paint maracas as part of a Hispanic Heritage Month lesson that Abbye Reynolds and her team from the Community Council for the Arts brought to the classroom on Wednesday.