And a long one. 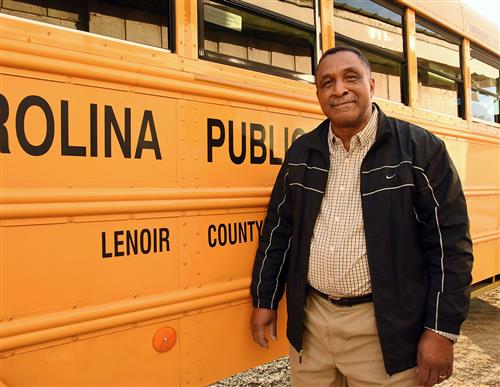 Nearly five decades after he first showed up as summer help in the district’s Transportation Department – where he’s been a bus washer and a tire changer and a fuel truck driver and a mechanic and a shop foreman and, for 27 years, the director – he is retiring at the end of this month at age 66.

“I worked my way up,” Mitchell said. “When you know the operation from top to bottom, you know what to expect from your employees. That makes a big difference in your leadership.”

During the string of events celebrating Mitchell’s retirement over the last several weeks, friends and colleagues rose to not only acknowledge his long and singular career but more often to praise his character. His calm demeanor. His authentic nature. His sense of integrity. His religious faith. Together, these characteristics comprise the quality for which Mitchell is best known in the school district – as an inspiring leader.

It is a skill Mitchell says he cultivated in the National Guard, which he joined the summer of 1975 after graduating from South Lenoir High School. He has since put his leadership ability into practice as an LCPS director, of course, but also as the mayor of Pink Hill, as a Free Will Baptist pastor and as a basketball referee.

“Management skills, I learned a lot of that from the military,” Mitchell said. “I learned a lot just being watchful and being a listener. I read a lot of books about leadership and great leaders, how they performed. It’s kind of been my life.”

During his 22 years in the National Guard, assigned to an infantry unit based in Beulaville, he rose to the rank of sergeant first class and, as a platoon leader, used subtle skills to merge squads segregated by race.

“Whenever you had lunch or had a break, it was always segregated,” he said. “I said I’m going to break this up. I started letting them eat together in squads and, when they came to work, give them a mission and let them work together. We started rotating (assignments) and before you know it, those guys were coming together and working together as a team.”

One night during a National Guard maneuver, when he was alone and “looking at the stars,” Mitchel said God spoke to him, saying “I want you to lead my people.”

He began taking online courses through Liberty Bible College but, by his own admission was not a particularly committed student. Until 2007, when, he said. “the Lord called me into the ministry.”

He enrolled online at Greater Mount Zion Bible College and Seminary with a much greater sense of purpose. “I just kept doing the courses and got my bachelor’s (degree) and just kept going and the next thing you know I’d gotten my master’s degree and then my doctorate.”

His career in the ministery began at Haughton Chapel FWB Church in Trenton and, four years ago, continued to the historic Shady Grove FWB Church in Snow Hill, known as the “Mother Church of the United American Free Will Denomination.”

“I have a passion for people and I want to see people being who God has called them to be. A lot of people don’t understand their purpose. When you teach a person about the Scripture and what it means and they get it, they are going to lead a better life,” Mitchel said.

For a young Anthony Mitchell, a high school sophomore, that place was the LCPS bus garage in 1973, a connection renewed in 1977 when he had completed basic training with the National Guard and became a full-time employee of the school district.

“During his 45½ years of dedicated service to his school system – never worked anywhere else but here – he’s done a great job. He has established excellence as his daily path and it’s shown to all who know him,” Superintendent Brent Williams said.

“He has increased LCPS operational effectiveness during his time and has earned multiple commendations and awards from the N.C Department of Public Instruction. The Rev. Dr. Anthony Mitchell is known as a great leader and an outstanding model for others, a man who has chosen to make his work mission one of devoted service to this school system, to our young people and to the mission of doing what is right.”

Looking back, hearing the praise heaped upon him as he nears retirement, Mitchell quietly concedes a sense of satisfaction. “It makes me feel like I’ve done my purpose here on the job and out there in the world. Here,” he said, referring to the only place he’s ever worked, “it’s been building a team that can carry on the legacy.”

In retirement, Mitchell plans to spend time pampering his wife Grace – “spending some quality time with her” –and playing with his four grandchildren and increasing his pastoral duties. Cindy Bruner, Mitchell’s assistant for many years, will step into the role of interim transportation director.