Donald Ingram, father of NBA All-Star Brandon Ingram and director of the Ingram Family Foundation, offered advice and his personal assistance to the students of Lenoir County Learning Academy during a motivational talk last week. 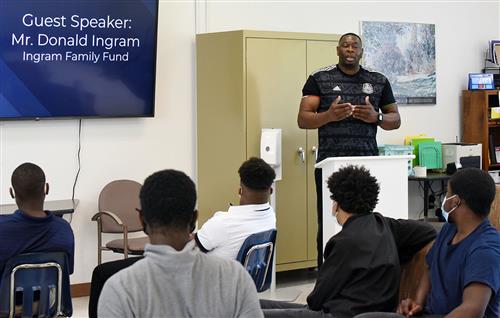 His advice was straightforward: prepare now for the future, be smart with your money and be careful in choosing your friends.

Ingram peppered his advice with personal anecdotes, including the work he and wife Joann put into preparing Brandon for life after high school.

“When he was in school, we as parents tried to make sure he stayed out of trouble and paid attention to his grades to prepare for the next level. When I say the next level, I’m not talking about sports. I’m talking about the next education level,” Ingram said.

The Ingrams also started saving for their son’s college education when he was a mere toddler. The money adds up, he said.

“Go ahead and start saving, so when you get ready to go to college, you will have something to fall back on.”

At age 24, Brandon Ingram is in his sixth year in the NBA. In November, he signed a five-year, $158 million contract extension with the New Orleans Pelicans. His future is secure. But it is a future he prepared for, his dad said.

“He followed the proper protocol, as far as classwork, working out at the gym. That’s why big-time college coaches came down to recruit him,” Donald Ingram said of Brandon, a Kinston High graduate. “He qualified. He did what he was supposed to do in the classroom.”

He also benefitted from coaches on and off the court, and his father endorsed the value of a helping hand.

Along with teachers and school counselors, he included himself among the resources the students could access – “I make myself available and try to help out in any kind of way,” he said – and through private assistance to individuals and through large projects undertaken under the banner of the Ingram Family Foundation, he has made the Ingram name synonymous with generosity.

The foundation has provided financial support to local youth development organizations like The Gate and Boys & Girls Club of Lenoir County, organized multiple backpack and school supply giveaways, donated 982 pairs of Adidas sneakers to UNC Lenoir Health Care – a pair of each hospital employee – and helped renovate the Martin C. Freeman Center at the old Teacher’s Memorial School as a venue for youth basketball leagues.