Charles White backed into a career in computers and technology. Going forward, he’s a candidate for an award honoring the state’s best public school technology director. 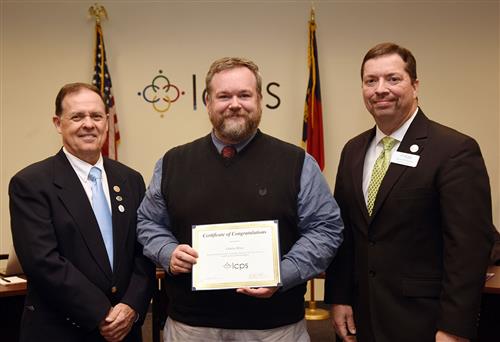 White, the director of media and technology for Lenoir County Public Schools for the past five years, was recently named the 2022-2023 Technology Director of the Year for North Carolina's 13-county Southeast Region. That recognition put White, along with eight other regional honorees, in the running for the state award, to be announced in March.

Not bad for a guy who graduated from East Carolina University in 1995 with a degree in English and intentions of becoming a high school teacher.

Since joining LCPS in 1998, White has worked as a school data manager and bookkeeper, headed up the distance learning lab at Kinston High School, coordinated various web-based student information systems like PowerSchool and NC Wise, organized the technology side of the district’s digital learning initiative and helped LCPS, its teachers and students navigate a Covid-imposed period of remote learning.

What he knows he’s learned by doing and by successfully completing workshops that have earned him multiple certifications in network design, cybersecurity and other technology fields. However, what makes him good at his work – “not being afraid to push a button sometimes” – and what he most enjoys about his work – providing support – have more to do with personality than professional development.

“Technology is just something I’ve always been good at and moving into that support role, even from the very beginning, was something I had an affinity for,” White said.

His technology skills, organizational savvy and probably his patience were put to the test eight years ago when LCPS launched its digital learning initiative and White helped lead the effort to put iPads in the hands of all K-12 students and equip teachers and classrooms with an array of Apple devices, a program known as one-to-one because a device is assigned to each student.

Superintendent Brent Williams looked back at that effort in recognizing White for his regional award at the Jan. 9 meeting of the Lenoir County Board of Education.

“Mr. White has been instrumental in the design and success of our district's digital learning program, ensuring the viability of more than 10,000 Apple devices used by our students and teachers as well as the infrastructure that supports them,” the superintendent said. “Additionally, Mr. White and his staff keep more than a thousand district employees digitally connected, watch over the health of our far-flung phone system and, if there's an app for that, make sure LCPS is plugged into it.”

Because of that experience, among others that comprise his varied career in technology, White is often a resource for his counterparts in school districts elsewhere.

“Since we’ve been in this for eight-plus years now, a lot of districts who are new to one-to-one have either called or visited or talked to us about how we’re doing things and what makes us successful,” he said.

A willingness to share and to support as well as his active participation on multiple state committees for technology -- including the state advisory committee for Home Base, the state’s suite of digital tools and instructional resources – made White “a very deserving winner of the Southeast Region award and a strong candidate for the statewide honor,” as the superintendent said.

LCPS Media and Technology Director Charles White is recognized as winner of the 2022-2023 Technology Director of the Year award for North Carolina's 13-county Southeast Region at the Jan. 9 meeting of the Lenoir County Board of Education by Bruce Hill, left, board chair, and Superintendent Brent Williams.