An LCPS elementary school cafeteria manager known for her love of children and her work ethic has won the title of 2020 Manager of the Year for North Carolina from the School Nutrition Association – the second consecutive year the award has gone to a cafeteria manger from Lenoir County Public Schools. 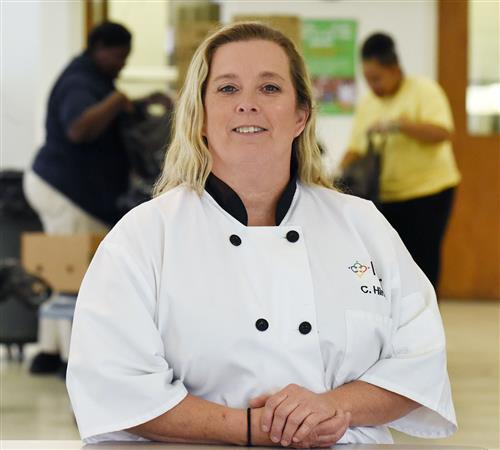 Cheryl Hinson, an LCPS employee for 27 years and cafeteria manager at Moss Hill Elementary School for the past three years, was nominated for the award because “she truly goes above and beyond to provide her students a positive environment in the cafeteria,” said LCPS Child Nutrition Director Danelle Smith, who wrote the nomination.

“You’re there for the children, because that’s the most important thing – the children,” Hinson said Tuesday, a few days after she received notification of her award from SNA in the mail.

“I was shocked,” she said. “I had to read it several times. I didn’t know what to think about it. I wouldn’t have ever thought I’d even be nominated to start with.”

Justification for her nomination – and her selection as the state’s top cafeteria manager – is solid, according to Smith and Moss Hill Elementary principal Stacy Cauley.

“Ms. Hinson is one of the first people that students see when walking into the school. She has a smile and shows kindness to each and every student,” Cauley said. “She wants students to feel welcome and know that they are part of our Moss Hill family and that she will be one of the adults in their life that will take care of them. I know that she is here for the right reasons and that her nurturing nature is what makes our cafeteria successful.”

Hinson’s approach to the manager’s role reflects her “passion” for serving her school and its children, according to Smith. “She continues to work hard and has a passion for meeting the needs of our students, feeding our students hot meals, providing a positive environment, celebrating our students’ successes and helping within the school outside of the cafeteria setting.”

A native of southern Lenoir County and a product of its public schools – like her grown son and daughter, she went from Moss Hill to Woodington Middle to South Lenoir – Hinson started as a cafeteria worker at Moss Hill. After working there 15 years, she moved to La Grange Elementary and Pink Hill Elementary before returning to Moss Hill as manager.

She’s partial to elementary schools because “I like seeing the babies, watching them grow up,” she said. “I’ve been there so long, you see the children, then you see their children and now I’m starting to see the third generation coming in.”

At Moss Hill, she supervises a staff of three as they serve up 300 hot lunches and 340 breakfast meals on a typical school day. In a school year less than typical, Hinson has worked with LCPS’s emergency feeding program since March and on Tuesday transitioned to the district’s summer feeding program.

With her schedule, it’s no wonder Hinson sees organization as the key to being a good manager. “There’s a lot of responsibility. You’ve got to step up and organize and delegate things out so the children are being fed,” she said.

“She runs an efficient kitchen,” said Smith, who praised Hinson and her staff for balancing the duties of meal preparation with additional responsibilities like the Fresh Fruit and Vegetable snack program provided all Moss Hill students, celebrations of National School Lunch and National School Breakfast weeks and a sticker program that encourages students to try new foods.

“I love children and just do everything from the heart. I always treat children like they’re my children,” Hinson said. “It gets to my heart that some children don’t get everything they need from home, but they get it at school. I love to nurture them, make sure they’re fed and make a difference.”

“That means we’re doing a lot of hard work in Lenoir County and we’re striving to make sure our children are well taken care of,” the 2020 winner said. “Evidently we’re doing our job well or we wouldn’t be recognized. I think everybody in Child Nutrition needs to be congratulated, because it’s not just me. It’s a team effort.”