North Lenoir High School junior Jack Britt is a walking advertisement for Kinston’s Chick-fil-A, his after-school employer; but his presence during Tuesday’s revival of LCPS’s job shadowing program – paused for nearly two years because of the pandemic – sold the benefits of connecting students and their career interests with local businesses. 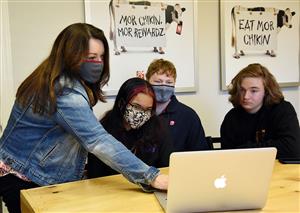 “It’s been some of the best five months of my life,” Jack said of his part-time work. “I’ve met a lot of new friends, learned a lot of social skills, learned how to be a leader. It’s a lot of fun, serving people.”

His introduction to Chick-fil-A came as a 14-year-old job shadower. He waited about two years – “until I got reliable transportation” – before pursing a job there. “I went with my application and brought a smile and I got a job.”

North Lenoir students Maria Urena and Cody Whitley may not end up where Jack Britt is now but on Tuesday they were where he started, getting an overview of the Chick-fil-A operation from owner/operator John McPhaul and marketing chief Wendi Howard in a job-shadowing event organized by LCPS’s Career and Technical Education (CTE) program.

In all, nine students from Ashley Griffin’s Sports Entertainment and Marketing honors class at North Lenoir shadowed hosts at businesses as varied as Neuse News, the digital news outlet, to the Down East Wood Ducks minor league baseball operation. Lenoir Community College hosted students in its graphic arts department and the college library.

Brittany Harrison, LCPS’s high school career development coordinator and organizer of Tuesday’s job shadowing, welcomed the return of this opportunity to get “kids connected to life outside the classroom,” as she put it. 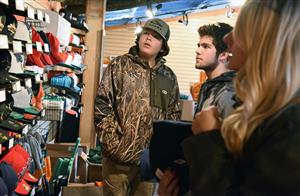 “The connection is through work-based learning,” Harrison said. “One of the main goals of Lenoir County Public Schools is getting kids college and career ready, but even more specifically with CTE, we have a focus on work-based learning. Job shadowing is one aspect of making that connection.”

The team behind Kinston’s Down East Wood Ducks – the seven-person front-office staff that includes Alexa Kay, director of marketing – connected students Ashton Hoffman, a senior, and freshman Carson Potter with the work that goes into connecting with fans.

An extensive survey of people coming to the ballpark, for instance, revealed two things draw fans above all others – fireworks and wearable giveaways. Consequently, fireworks nights and giveaways are more heavily scheduled. “We were trying to figure out what attracts our audience the best, what caters to our demographic,” Kay told the students. 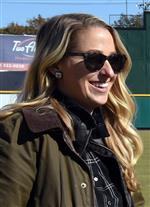 Both Ashton and Carson were familiar with the Wood Ducks from the fan perspective, but Tuesday’s visit showed them a side of the game at least as important as wins and losses.

“I thought it would be interesting to see the different types of marketing and everything that goes into it,” Ashton said. “Everybody’s been giving us run-downs of what they do, and they do everything. They’re good at it.”

At Chick-fil-A, Wendi Howard connected her two students with the CFA One App for marketing. “We discussed the ways I use the app,” she said. “These insights and activation platform enable us to better know our guests so that we can care for them personally. The students helped load a treat on the apps of a few guests so they could see exactly how it works and the ‘why’ behind it.”

That personal touch is a lesson former Chick-fil-A job shadower and current Chick-fil-A employee Jack Britt took to heart. How would he sell his classmates on work at Chick-fil-A? “The chicken is more of a vessel to customer service and learning how to engage with people and handle situations more than anything else,” he said. “It’s a lot of fun.”