The pungent smell of fresh broccoli wafted through Latoya Phillips’ classroom even before she finished passing out the morning’s snack. None of the third graders turned up their noses at the thought of eating vegetables, but they saved their excitement until the teacher brought out the ranch dressing. 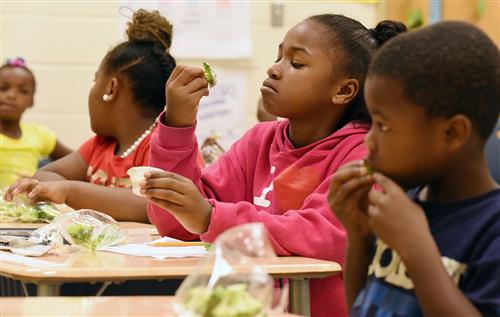 Three days a week Phillips’ students and their schoolmates at Southeast Elementary get a nutritious treat thanks to an expanding program that now provides fresh fruit and vegetables snacks to more than 3,000 students at six elementary schools and the pre-kindergarten classrooms in Lenoir County Public Schools

Southeast and Southwood elementary schools joined the program this school year. LCPS started with two schools three years ago, after landing the original U.S. Department of Agriculture grant that funds the program, and has added two schools at year.

“The students really look forward to it and they’re able to try some fruits and vegetables that otherwise they’re not exposed to,” Phillips said, ensuring a classroom visitor the broccoli would be a hit. “They’ll love that. They love ranch.”

Grapes and strawberries are other favorites, she said.

Radishes, not so much, according to Southeast cafeteria manager Kameka Stevenson. “Too hot,” she said as she and cafeteria staffer Shanika Rhem packed 300 packages of broccoli and 300 cups of dressing into bags marked for each class early Tuesday morning.

“I think the plums are the most popular,” Stevenson said. “They like those and they don’t get them often.” 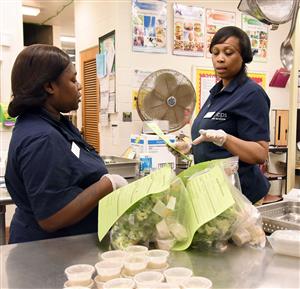 In addition to giving students what Stevenson calls “a good in-between snack” that bridges breakfast and lunch or lunch and the end of the school day, the fruit and fresh vegetable initiative serves an educational need, teaching healthy eating and solving the mystery of what those odd-looking things in the grocery store actually taste like.

“We want to introduce these flavors to students when they’re young so they’ll make healthy choices when they’re in middle and high school,” Danelle Smith, LCPS’s child nutrition director, said. “These are lessons that will serve them well as adults.”

Some of the snack items, like the broccoli served Tuesday, come pre-packaged. Other items, like cucumber slices, require some preparation by cafeteria workers. “It’s worth it,” Stevenson said. “It’s a service. It introduces them to different fruits and vegetables and I think they like it.”

As her students snacked, Phillips talked about broccoli – how it could be cooked or eaten raw, how it might show up in a salad or under a cheese sauce. The students, she told them, where under no obligation to eat all their snack, but they should give it a taste test.

“We always have a hundred percent participation,” she said. “They love to eat.”

Top -- Third grader Amiyah Mills appraises a broccoli spear during snack time in Latoya Phillips' class at Southeast Elementary School. This school year, Southeast and Southwood became the fifth and sixth schools to participate in a fresh fruit and vegetable snack program that serves about 3,000 students three times a week.