Woodington Middle School seventh grader Connor Rowand has earned state and national recognition from the Duke University Talent Identification Program for his ACT test score and three other Woodington students have won plaudits from Duke TIP for their results.

Connor scored higher than 90 percent of college-bound seniors on the ACT. As a result, he’s been invited to the upcoming State Recognition Ceremony at East Carolina University and to the Grand Recognition program that will follow at Duke. 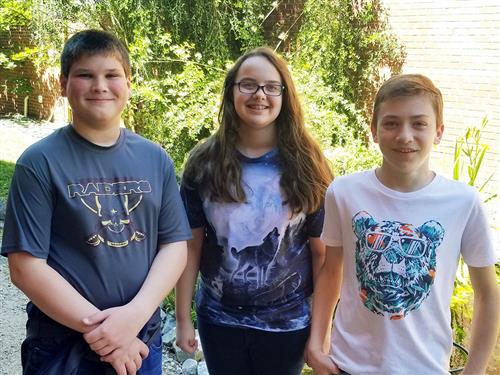 Also invited to the ECU ceremony are, from left in photo, Hayden Zeagler, Trinity Beverly and Ronan Russell, Woodington students who scored higher than half of all college-bound seniors on either the ACT or SAT exams.

This is the second consecutive year that a Woodington seventh grader has qualified for Grand Recognition, an honor reserved for about 5 percent of the students involved in Duke TIP’s nationwide Seventh Grade Talent Search.

Connor said he wasn’t expecting it.

“I was quite surprised,” he said. “When I left (the test site), I was feeling like I did pretty good, but I really didn’t think that I did great or horrible. I thought I did good, and I did really good.”

Duke TIP’s Seventh Grade Talent Search identifies students across the United States who have scored at or above the 95th percentile on a grade-level standardized test. As part of the program, these academically talented students take above-level college-entrance exams to learn more about their abilities. Those with the highest scores are invited to the Grand Recognition Ceremony.

Except for the fact he’s a 12-year-old seventh grader – he skipped the fourth grade at Moss Hill Elementary – Connor seems like a pretty typical middle school boy.

When he’s not in school he likes to play video games and watch You Tube videos and when he’s in school he’s partial to science class. “I just think science is fascinating and fun to learn about. It’s really fun to do the projects,” he said.

His future might track toward a career as a physicist or mathematician, Connor said – maybe even with the help of a degree from Duke, now that the university’s caught his eye through TIP.

“There’s definitely a great opportunity there,” he said.

Connor is the son of Heather and Earl Rowand of Kinston.