'Empowering' leader is LCPS Principal of the Year

You might find Patrick Phillippe picking up trash around the school grounds, sweeping the floors, tending to a garbage can in the cafeteria, but he’s not the handyman at Woodington Middle School. He’s the principal. 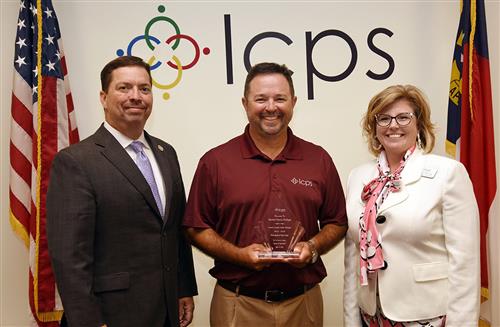 “One of the most important ways that I create trust and mutual respect is the fact that I do not expect anyone at Woodington to do anything I would not do myself,” Phillippe wrote in the portfolio provided as part of the district’s Principal of the Year selection process. “I feel that our staff knows that I am willing to do whatever is needed to make their day go as smoothly as possible.”

One of the letters written by faculty members in support of Phillippe’s nomination – a letter read by Pamela Health, the district’s human resources director and chair of the Principal of the Year selection committee, during Tuesday’s announcement event – put it this way: “Mr. Phillippe is a true leader for the faculty and staff of Woodington Middle School, never asking his staff to do something he would not do himself. He believes in his employees and students and empowers them to be successful.”

In accepting the recognition before his fellow principals and district administrators, Phillippe said the honor was enhanced by his respect for previous district winners, many of whom were in the room. “To be standing here in this company is humbling,” he said. “Hopefully, I’ll represent you well for the region.”

Phillippe has worked 27 years – his entire career in education – in Lenoir County Public Schools. He taught for 17 years at Woodington, spent two years as assistant principal at South Lenoir High School and returned to Woodington as principal eight years ago.

By his own accounting, he’s not the school leader today that he was when he started. More of a by-the-book, somewhat hardnosed administrator in his early days, Phillippe recalled, he now sees the benefit of having a “variety of thinkers” on his team, promotes communication among his staff and values the exchange of ideas.

He’s also become more understanding of his students, because he’s made a point of getting to know them better, because for several years he did something most principals don’t do – drive a school bus.

“As educators, we have to learn the backgrounds, behaviors and challenges our students are faced with each day so that we are ready to address them,” Phillippe wrote in a section of his portfolio. “As a principal, for several years, I drove a bus when we needed a substitute and I have seen firsthand what my students go home to.”

The selection committee, comprised of district administrators and last year’s Principal of the Year, Dr. Heather Walston, narrowed the field of nominees to four finalists, who sat for interviews. In addition to Phillippe, they were Kellan Bryant of Kinston High School, Rashard Curmon of Northeast Elementary School and Terry Wooten of Rochelle Middle School.

“It’s an honor and privilege to be able to stand before you and be able to celebrate the accomplishments of these principals today,” Heath said in introducing the finalists Tuesday. “Reading the comments that the staff members wrote about our principals was certainly inspiring. It was uplifting and encouraging to know that we are so fortunate to have such wonderful leaders in our district.”