LCLA grads make a start on writing 'own story'

Graduating seniors at Lenoir County Learning Academy were urged to “write your own story” as they head into the world after commencement exercises Wednesday.

Holding up a blank sheet of paper, Gray, the Army JROTC instructor at Kinston High School, cautioned the seniors against letting others define their lives. “In school, if you get suspended, you give that piece of paper to somebody else to write your story. Once your story is written, it’s written; you can’t go back and change what happened yesterday. You can learn from what happened yesterday, but you cannot rewrite your story.” 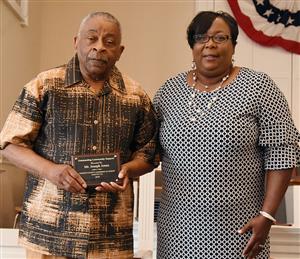 Principal Stephanie Smith reminded the graduates they had reached a milestone – a good first paragraph in their autobiography, as it were.

“The moment you are called to the stage to receive your diploma, resplendent in your cap and gown, is a moment to savor and enjoy. It is a historical moment,” she said. “You cannot lose what now has been given to you. The achievement will be yours forever."

Smith presented the school’s Community Support Award to karate instructor Joseph Jones, owner of Little Union Academy in Kinston, whom she described as a regular presence at the school and source of encouragement for students.

The Outstanding Behavior and Achievement Award, given annually to a student who has exhibited admirable effort during the school year, went to junior Ronald Smith. Smith and classmate Toian Tyrell served as commencement marshals.

Below -- Members of the Class of 2019 at Lenoir County Learning Academy pose with principal Smith before commencement Wednesday.