A few minutes before 8 o’clock on Sunday morning, Bryant De Luna-Peralta sat at a computer in his home in La Grange repeatedly clicking the “refresh” button, nervously awaiting a message from the future.

“I didn’t know what was going to happen,” the North Lenoir High School senior said. “I wasn’t very confident. I was just like, ‘Let’s see what happens,’ and I just sat there, clicking, clicking.” 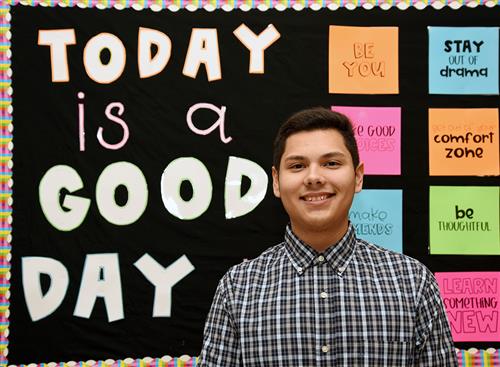 At precisely 8 a.m., just as the people at UNC-Charlotte had promised, a letter popped up on the screen.

“I just saw where it said, Congratulations, you have earned a spot in the Class of 2024,” Bryant said. “I read it like 15 times before I realized I actually got it.”

‘It’ is UNCC’s top scholarship, the Levine – a four-year scholarship that includes full tuition, room, board, four summer adventures and a grant to implement a student-designed service project. The total value of this four-year package is estimated at $105,000 for in-state students.

Of the 3,000 or so students who apply for a Levine Scholarship each year, only 20 get to the place Bryant found himself Sunday.

Seventy-six finalists went to Charlotte Feb. 9-10 for the deciding Levine interviews and activities. After a first-day tour of the campus, Bryant spent 30 minutes in front of a three-person scholarship committee, another hour with nine other students in a monitored group discussion and a final solo interview with two directors of the scholarship program.

“Leaving, I felt I really liked the school,” he said. “I didn’t feel too confident in my interview. I didn’t feel like I covered the points I wanted to.”

He had had a previous close call with scholarship success, earning a spot as a semi-finalist for the Park Scholarship, N.C. State University’s most prestigious scholarship, before being named an alternate finalist, just short of the goal.

“The fact that I made it that far, I’m proud of that; but for a bit it kind of hurt,” Bryant said. “I thought (the Levine) is the last shot. The night before I went to Charlotte, I could not go to sleep. The night of the first day there, I barely got any sleep. Then things just happened.”

That weekend may have told the tale, but the story actually unfolded over four years of hard work by a young man – the oldest of three children of Anselmo De Luna and Yazmin Peralta – who will be the first in his family to graduate from high school.

The Levine Scholar, according to its website, puts a premium on “community service, … an academic record that reflects a sustained passion for knowledge, and … a capacity for ethical leadership that elevates fellow students to a higher standard.” Eighteen-year-old Bryant De Luna-Peralta’s resumé checks all the boxes.

Ranked No. 2 academically in his class, he is focused this senior year on college-level classes through Lenoir Community College and expects to leave North Lenoir with about 36 college credits, enough that he should enter UNCC as a sophomore. He’s still active in high school as a student tutor and as an officer or member of several clubs. He is also a member of Junior Leadership Lenoir, a year-long youth development program sponsored by the Lenoir County Education Foundation, and has volunteered as a maintenance crew leader at Kennedy Home.

“Bryant is incredibly gifted as a student. What makes him special, though, is how he helps his peers, whether it is through tutoring in a math class or helping out on the soccer field. He is both kind and patient and is a role model at the school,” North Lenoir principal Gil Respess said.

“Coming into high school I wasn’t as motivated,” Bryant said. “It wasn’t until the end of the first semester that I started to push myself. I saw the (academic) ranking system and saw that I was high up there.”

He was ranked sixth then. Each semester he moved up a notch. “It was a slow push up and I ended up in second. I think starting closer to the bottom made me want to push harder. I had to work my way.”

He has worked his way into a place where he can relax a little and “get prepared for the future,” he said – laying the groundwork for a career as a computer engineer during four years of college without financial worry.

“I wasn’t sure how things were going to turn out. I didn’t know how I going to be able to pay for everything,” he said. “Once I got the letter, a lot of weight came off. Honestly, I think my dad was more excited than me.”

Also in his corner was a Lenoir County woman Bryant knows only by name – and by the wishes for his success that Dorethea M. Branch penned in a letter written after seeing a newspaper article on Bryant’s quest for top college scholarships.

“That’s one thing that did keep me motivated,” he said. “Right after the first newspaper article, I got a letter from her, saying congratulations. I did read that letter multiple times. It kept me focused. I understood this scholarship is not just for me. It’s for my parents, obviously, and it’s people who want to say they’re from a county where a student made it far.”