Eternally optimistic, always smiling, Andre Clark says his motto is “You gotta believe.” Except when he received that letter from the School Nutrition Association saying he had been chosen as the 2020 Employee of the Year for North Carolina.

He didn’t believe it. 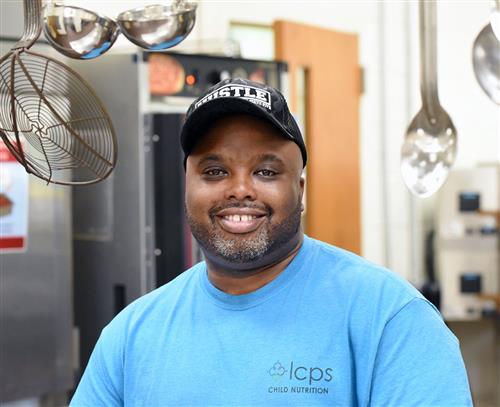 “To be honest, I thought I was being punked,” Clark said. “I had to ask somebody. Now that I know it’s real, I appreciate it. It’s a big honor.”

Each year, SNA of North Carolina selects one cafeteria manager and one non-managerial school nutrition employee for the contributions they have made throughout their school nutrition career.

Danelle Smith, LCPS’s director of child nutrition who nominated Clark and Hinson for the awards, called the district’s supersizing by SNA in 2020 “exciting news” and said both award winners bring dedication, an interest in learning and love of children to their jobs.

“Andre works hard and has a great attitude coming into work,” Smith said. “He represents all of us in the Child Nutrition Department and our whole school district with his passion for feeding children in our community. He is so deserving of this recognition.”

Clark started with LCPS after 10 years in the kitchen at what was then Lenoir Memorial Hospital, working first at La Grange Elementary before moving last year to CSS. Since the state closed public schools in March in reaction to the coronavirus pandemic, Clark has worked at multiple school sites and on meal delivery duty as part of feeding programs that have distributed more than 200,000 meals to Lenoir County youth.

“Wherever they need me, I have no problem going as long as I’m helping and getting the job done. We’re all in this together,” he said.

Clark has the skills – he started cooking in restaurants when he was 16 and, since joining LCPS, has achieved a high level of certification through SNA training – but it’s the attitude that most distinguishes him.

“I don’t have any negative energy. I figure if you’re positive, you can get more done,” he said. “Besides, I really enjoy this work, helping the kids. It’s like an adventure for me.”

As at work, cooking and children are a big part of his life at home. He and his wife, Charlene, have seven children, ages 5 to 15, three of whom require special diets. “We have to have a certain menu. I work with Duke (Health) staff with their menu and then I work with (the children’s) schools, so what I do at work is right in my ballpark,” Clark said. “That’s one reason the training has been so good, particularly about health issues.”

A 2000 graduate of Kinston High School, Clark arrived here in time for the eighth grade at Rochelle Middle after bouncing around the country as what he called “an Army brat.” Today, he sounds like a man who’s found a home, both in Lenoir County and with Lenoir County Public Schools.

“Any school I’ve been to is always like family,” he said. “I’m blessed by God to be able to do this work and I appreciate everything.”