Students up to elbows in grant-funded pumpkin project

A grant that emphasizes the connection between local farms and food served at school grew into a Halloween treat for some LCPS students this week.

Part of the $4,000 Farm-to-School Rapid Response grant awarded to the school district’s Child Nutrition Department purchased about 40 pumpkins from Porter Farms, a local produce operation, and put them in the agriculture education classroom at Woodington Middle School for a special project that combines lessons about nutrition and food production. 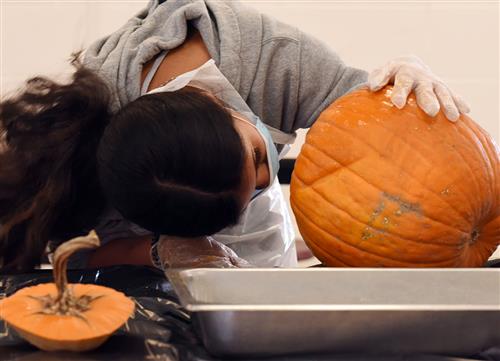 This week, students at Woodington are hollowing out the pumpkins and patiently separating the seeds from the stringy pulp. The washed pumpkin seeds will be roasted by the school’s cafeteria staff for the students to sample next week. The pumpkins, ready for carving, go home with the students.

South Lenoir High School ag students are up to their elbows in the same project with pumpkins purchased by the district’s Career & Technical Education program, which includes ag education.

As the students donned plastic gloves and aprons, Jones tossed out some questions about the pumpkin – which, it turns out, is much more than a symbol of fall and Halloween or a replacement head for the Headless Horseman.

·  Vegetable or fruit? A pumpkin is considered a fruit because it’s a product of the seed-bearing structure of flowering plants. (That means the seeds are inside.)

·  Did the Pilgrims eat pumpkin pie at Thanksgiving? Not likely. They had no flour.

·  Where did pumpkins come from? They originated in Mexico and Central America about 7,500 years ago, although one student’s answer – “from a patch” – should get at least half credit.

·  Pumpkins, like corn, can grow almost anywhere. Except? Antarctica 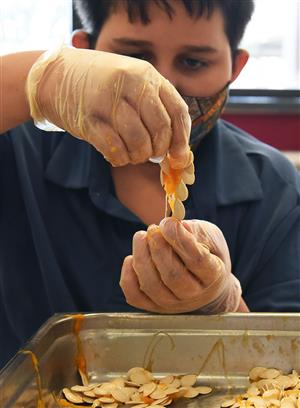 And, by the way, roasted pumpkin seed are rich in fiber and full of magnesium, which helps to relax nerves and muscles, strengthen bones and boosts circulation.

In addition to being the month in which most of America’s 1.5 billion pounds of pumpkin are harvested, October is also Farm to School Month, a fact Jones made sure was not lost on her students.

“We want to support our local farmers because their products are fresher than those you’re going to get somewhere else,” the teacher said. “And they’re really good about supporting education.”

The Farm to School Coalition of North Carolina provides the Rapid Response grant funding to help schools meet students’ nutritional needs during the disruption caused by the coronavirus pandemic and to “build farm-to-school capacity.”

Funds left from this most recent Rapid Response grant after the pumpkin purchase will be divided between North Lenoir and South Lenoir high schools to assist with their greenhouse operations, according to Child Nutrition Director Danelle Smith.

LCPS was one of 18 public school districts in the state to receive this $4,000 grant. Earlier this year, the district received two other Rapid Response grants, each for $4,000, that helped fund its emergency feeding program.

(Top) Jackie Lopez, a seventh grader at Woodington Middle School, looks for stray seeds after cleaning out her pumpkin Tuesday during a project funded by a grant from the Farm to School Coalition of North Carolina.

Jason Jacobs separates pumpkin seeds from the stringy pulp. Once washed, the seeds are roasted and returned to the students as a snack.