A 10th grader at North Lenoir High School has won national recognition and a college scholarship for an essay she wrote in celebration of Hispanic Heritage Month. 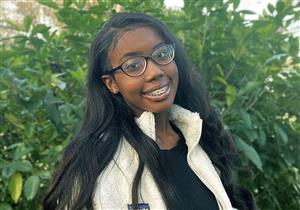 Shyaé Hood of Kinston was one of four grand prize winners of the 2020 Suddenlink Hispanic Heritage Essay Contest honored in a virtual ceremony Wednesday night and awarded a $1,500 scholarship. She is the first-ever winner from North Carolina.

The contest – sponsored by Altice USA and Univision – awarded top prizes to two high school and two middle school students and runner-up awards to a dozen students nationally. The high school competition drew about 165 essays from students in 18 states, according to contest sponsors.

This year’s essays explored the theme “Recognizing Hispanic Heroes” and Shyaé fell back on her own interest in art to feature Jean-Michel Basquiat, an American contemporary artist of Haitian and Puerto Rican descent who died in 1988 at age 27, at the height of his fame. She titled her essay “Why Hip-Hop Loves Basquiat.”

“I wanted to incorporate someone who was a part of my culture as well because he was Hispanic and Black,” Shyaé said in a telephone interview before the awards program. “I emphasized his painting because they were very distinct. They were different but behind that there was always a message.

“He had a very hard life,” she continued. “He was homeless much of the time and he battled addiction. When you’re a minority, you are more likely to deal with that in your lifetime.”

In her essay she wrote: “His death being very tragic does not take away his legacy. Basquiat’s innovative and symbolic pieces are what inspires me & those around, giving different aspects of life in a way like no other. Challenging high-end and low-end art, also race and class.”

Shyaé was alerted to the essay contest through an email from school counselors. “Our counseling department sends out scholarship information as we get it and this is one we send out every year,” counselor Rachel Hewett said. “It takes place during October's Hispanic Heritage Month.”

Both Hewett and North Lenoir principal Gil Respess know Shyaé as a hard-working student. “In working with Shyaé, I have found her to be kind and sweet and she is a very hard worker. She has a smile that can light up a room,” Hewett said.

Respess joined the Zoom broadcast of the awards program to offer congratulations to his student: “On behalf of the faculty and staff of North Lenoir High School, we want to recognize Shyaé for her accomplishment. We are so very proud of you. Your teachers, former and present, are not surprised because you are a hard-working young lady.”

About her grand-prize win, Shyaé said she was surprised – but not totally. “I was kind of shocked,” she said, “but I felt as though I had written something special and I thought people would notice that.”