Elizabeth Espino wanted out of the first agriculture class she enrolled in as a sophomore at North Lenoir High School. The FFA in North Carolina is glad she changed her mind.

Three years later, Espino – a 2020 graduate who is now a rising sophomore at N.C. State University – finds herself leading the state organization as its newly named president, representing it in national competition as winner of this year’s North Carolina FFA Prepared Speaking Leadership Development event and espousing the benefits of agriculture education as the student featured in an NCSU publication. 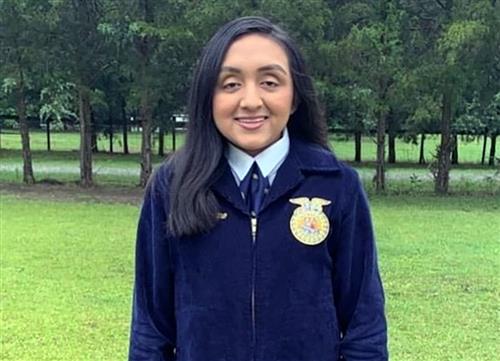 “I took my first agriculture class in the spring semester of my sophomore year, which is a bit later than most students take it,” Elizabeth said in a telephone interview this week. “I remember completely wanting to drop out of the class the first day. I’m like, agriculture is not my thing; it will never be. Now I’m here.”

The transformation began when Ray Spence, who taught that introductory Agri-Science Applications course, discussed with students the essential role American farmers play in feeding the world and encouraged the class to get more involved in ag education as members of the North Lenoir FFA chapter – and, in Elizabeth’s case, as a leader in the organization.

As a student at Greene Central High School, Spence himself served as a state regional vice-president. He continues as an agriculture teacher and an FFA advisor at North Lenoir

“Elizabeth was a little bit late getting into the agriculture program and she was very uncertain about being in that class,” he said.

“I think, from what she’s told me, one of the first lessons that really got her was about the future of agriculture and the need to feed 10 billion people by the year 2050. In class I always try to make kids understand where their food comes from and how they fit into the food system as a whole. Chocolate milk just doesn’t pop into the grocery store.”

The North Carolina FFA describes itself as a “youth organization within agricultural education that changes lives and prepares students for premier leadership, personal growth, and career success.”

Along with a burgeoning interest in agriculture, Elizabeth left North Lenoir with the leadership skills that FFA promises, as well as some practical experience. She was chosen the school chapter’s secretary her junior year and, as a senior, served as chapter president and as a regional vice-president.

“That was what kind of hooked me in, the leadership aspect,” Elizabeth remembered. “I was a sophomore in high school trying to find my own place on campus.”

As one of eight regional vice presidents, Elizabeth worked with FFA chapters at about 40 schools. “I got to see what kind of positive impact I was able to make on students and teach them about American agriculture and teach them more about FFA. That basically is what prompted me to want to run for state office.”

The selection process involves the candidate’s application, a cover letter, a resumé that highlights FFA experiences, letters of recommendation and, this year, a virtual interview with a 10-person nominating committee, one component of which is a five-minute presentation on a topic given to the candidate 24 hours before the interview.

Elizabeth may have had an advantage in that particular challenge as a seasoned public speaker who in May became the state champ in the prepared speaking contest, an event that required her to advance in three stages of competition and on the regional and state level involved more than 30 FFA students. Because coronavirus concerns foreshortened last year’s competition, when she also competed, Elizabeth got to try again this year as a college freshman.

To get to final competition at the National FFA Convention in Indianapolis this October, Elizabeth will have to advance out of a virtual preliminary round in September. But as president of the state chapter, she’s going to Indianapolis anyway.

In the meantime, she’s getting to know the other five state officers, preparing for the (virtual) State Leadership Conference and a two-day conference for state presidents in Washington, D.C., this month.

“As FFA president, it’s my job to set the mood, the environment in the meeting room, of how things are going to go, trying to be that positive cheerleader for the rest of the officer team,” Elizabeth said. “They’ll be times when I’ll work more closely with the state FFA advisor and I’ll serve as a great communicator for the rest of my teammates.”

And, of course, there’s college, where she’s majoring in agriculture education and considering what she wants to do after N.C. State.

A story published in May in the online Agricultural and Human Sciences News from NCSU featured Elizabeth and her internship during the spring semester with the North Carolina Agromedicine Institute. “Her internship experience has shown her endless career opportunities and because of that, she is now debating whether to educate in the classroom setting,” the story reads.

But whether her degree takes her into the classroom or agriculture extension service work or other occupations, her job will likely involve teaching – “I’ve always leaned toward education because I love working with others,” she said – and will certainly involve leading.

“Leadership has been very important to me from a young age,” she said. It’s a learned skill, she thinks, and a skill that can be learned in FFA and other clubs connected to the school district’s Career and Technical Education (CTE) curriculum, like FBLA for business-minded students or OSHA for those interested in health care.

“I would encourage students to take advantage of the CTE classes we have in Lenoir County,” Elizabeth said, “because they have no idea where it can take them.”

Elizabeth Espino, a 2020 graduate of North Lenoir High School and a rising sophomore at N.C. State University, is the newly named president of the North Carolina FFA.