An educator who brought decades of experience to Lenoir County Public Schools four years ago as a middle school math guru has joined the ranks of the state’s most elite teachers as a 2021 inductee into East Carolina University’s Educators Hall of Fame. 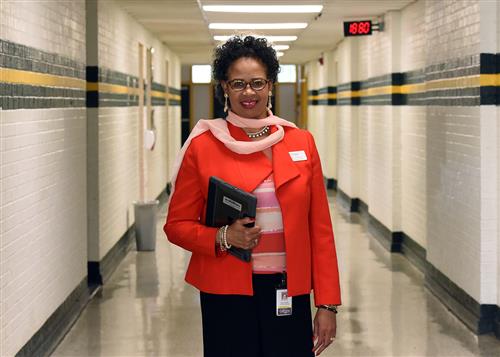 Constance Wallace Cheston, who retired in 2014 after 33 years with Pitt County Schools only to return to the schoolhouse as a mathematics curriculum specialist with LCPS in 2017, was one of four educators honored at the 22nd annual Educators Hall of Fame induction ceremony sponsored recently by the ECU College of Education.

The ceremony, held virtually and hosted by Art Rouse, acting dean of the College of Education, installed as members “four outstanding individuals who have impacted many lives through their service and support of the field of education,” Rouse said.

For Cheston, the Hall of Fame induction affirmed a career decision she made as a student working her way through ECU years ago. “This is my 39th year in education and I have enjoyed that calling, so I was kind of in awe of it honestly,” she said of the honor.

The Educators Hall of Fame itself, she said, “signifies excellence in education. I think it looks for those people who have done things for a long time – they’ve got some longevity – but I think they also recognize those who have made a difference.”

A 1982 graduate of ECU with a bachelor of science degree in intermediate education with concentrations in reading, mathematics, science and social studies, she started in the classroom that same year at Farmville Middle School, where during a tenure that extended to 2004 she taught math, science, social studies and reading, served as math and science department chairs, coached girls’ basketball and served as women’s track coach for the former Central High School.

She was named Pitt County Teacher of the Year for 1993-1994 and won the Outstanding Administrator Award in Science, Mathematics and Technology from the NC Mathematics and Science Education Network in 2010.

She worked as K-12 instructional mathematics and science coordinator for Pitt County Schools from 2005 to 2014 and after her retirement began work as a testing executive with the National Assessment of Educational Progress, a congressionally mandated assessment program known as the nation’s report card. Cheston continues her work with NAEP while serving as math curriculum specialist based at Rochelle Middle School in Kinston, a position that fits into what she calls “my niche,” a combination of instructional acumen and leadership skills.

As a coach working with both new and veteran teachers, Cheston stresses the value of routine in the classroom. “I talk with teachers about having procedures, having routines, so when kids come in they know what they’re supposed to do. If you put that procedure in place, it will make every routine you do easier,” she said.

“I don’t have preconceived notions about schools. If I can do something that will help, I’m eager to do that. I try to put my best foot forward. I like people and I like teachers, especially young teachers because someone did that for me when I started,” Cheston said.

Cheston was sponsored for Hall of Fame membership by Dr. Vivian Covington, assistant dean of undergrad affairs with ECU’s College of Education. Because the 22nd annual event was held virtually, Cheston and others in her class are invited to attend the 23nd annual induction ceremony, scheduled as an in-person event for November.

A plaque honoring her Educators Hall of Fame membership hangs in Speight Hall, home of the College of Education. Its inscription celebrates Cheston as a “guiding force in mathematics education for students and teachers; committed to improving and promoting excellence through dedication and service.”