Two women who, in their own way, help guide the workings of Lenoir County Public Schools are 2022 winners of the annual awards presented by the LCPS chapter of the N.C. Association of Educational Office Professionals. 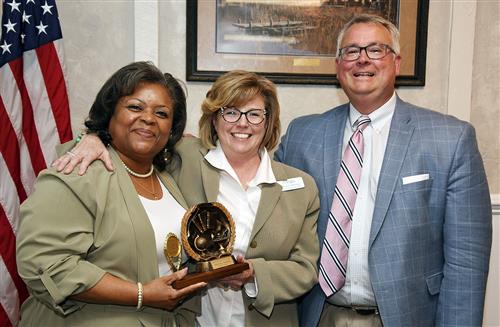 Like the national and state organizations of AEOP, the local chapter strives to provide professional growth through leadership, education, achievement, recognition and networking opportunities for educational office professionals.

Herring joined LCPS in 2002 after a career change that saw her move from a law office to the high school classroom. After a stint as an English teacher at Kinston High School, she became an assistant principal there in 2008. She served as principal of Contentnea-Savannah K-8 School from 2011-2014 and while there was named Regional Principal of the Year for southeastern North Carolina.

She took up district-level duties in 2014 as curriculum director and in 2015 was named associate superintendent, a position that focuses largely on curriculum, teaching and learning. She led the district’s successful accreditation renewal efforts in 2021 and is the chief architect of LCPS’s summer learning programs, which last year drew nearly 3,000 students.

Herring holds a bachelor’s degree in English from the University of North Carolina, a law degree from the Cumberland School of Law at Samford University in Birmingham, Ala., and a master of school administration degree from East Carolina University.

Written endorsements of her nomination for the Administrator of the Year award praised her leadership skills and her commitment to LCPS students. “Her life is centered on service for others not only as your associate superintendent but as a wife, mother, daughter, active church and community member and as a friend,” one supporter wrote. 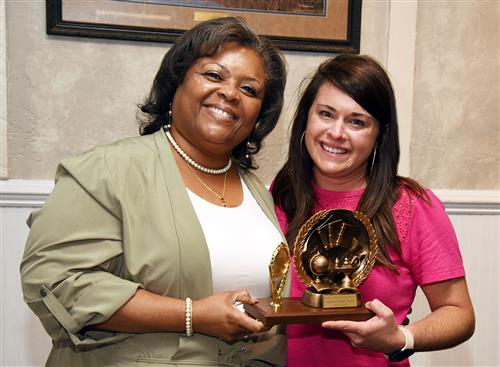 The AEOP Professional of the Year award honored Taylor’s organizational skills, her attention to detail, her positive attitude and the active role she plays in the AEOP chapter.

“She is an outstanding employee who loves what she does and works to make positive interactions and effective, meaningful outcomes a daily reality for our school system and our stakeholders,” a recommendation letter for Taylor reads.

A native of Murfreesboro and a graduate of Chowan University, Taylor came to work for LCPS as an administrative assistant in the Exceptional Children’s program. She has been in her current position for five years, reporting directly to the superintendent.

She has chaired and served on a number of committees of the local AEOP chapter and, in the district office, heads up the Sunshine Club, which organizes social events for Central Services employees. She has logged more than 80 hours of AEOP-sponsored professional development and volunteer activities. She is the vice president of the LCPS chapter for 2022-2023.

A supporter of Taylor’s nomination cites her “ability to professionally and efficiently manage the Office of the Superintendent and serve each member of the Board of Education. There is never a moment, in any day, that she is not relied upon by a community member, parent, principal, director, board member or state and local level elected officials.”

Associate Superintendent Frances Herring, with husband Mark, accepts the Administrator of the Year award from Sharron James-Bizzell, presenting on behalf of the LCPS chapter of the Association of Educational Office Professionals at the chapter’s annual awards luncheon Wednesday.

Jessie Taylor, right, executive assistant to Superintendent Brent Williams, was honored as AEOP Professional of the Year by the LCPS chapter of the Association of Educational Office Professionals. Sharron James-Bizzell, the district’s licensure specialist and a member of the selection committee, presents the award.