Seventh grader Amani Bailey hasn’t yet decided where she’ll attend college; but when she gets ready to go, she’ll take a big scholarship with her. 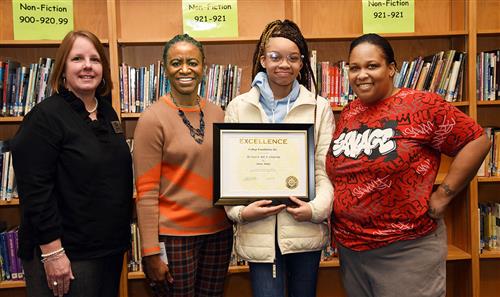 The Rochelle Middle School student is one of 15 winners statewide of the 2022-2023 Victor E. Bell Scholarship provided through the College Foundation of North Carolina (CFNC). With the scholarship, CFNC places $2,000 a year into an account that Amani will be able to access when she enrolls in a college. The potential value of the scholarship is $20,000.

The announcement of the scholarship award was made Tuesday at the school before an audience that included Amani’s family, fellow members of the school band, principal Terry Wooten and school counselor Shenna Johnson.

“Amani is an outstanding student who has demonstrated and maintained academic excellence throughout the school year,” said Johnson, who with principal Wooten nominated Amani for the scholarship.

“Amani has achieved honor roll and principal’s list recognition throughout her sixth and seventh grade. Amani is resilient by facing challenges with confidence, a positive attitude and determination. She is supportive of her classmates and a model student who represents her Rochelle Middle School family well.”

Amani was chosen from among more than 150 nominees, according to CFNC regional representative Amy Denton, who presented the award.
This is the third time since 2014 that a Rochelle student has been named a Victor Bell winner and the fourth win for an LCPS middle school student in that time.

“Renewable through four years of college, as long as usual eligibility requirements are met, the scholarship program encourages students with academic ability and promise to maintain their scholastic standing and achieve a college degree,” Denton said.

The scholarship’s namesake was a Raleigh banker and long-time chair of the CFNC’s board of trustees.

Amani Baily, a seventh grader at Rochelle Middle School, is one of 15 students statewide chosen for the $20,000 Victor Bell Scholarship provided by the College Foundation of North Carolina (CFNC). Joining her at this week’s announcement are, from left, Amy Denton, CFNC regional representative; Rochelle principal Terry Wooten; and Amani’s mother, Lynette Bailey.